Courage is the first of six virtues that Treasure Valley Classical Academy will seek to cultivate in our students. Students will be exposed to different kinds of courage throughout the curriculum and will be expected to demonstrate courage in their day-to-day lives. For example, our 6th graders will be expected to memorize Rudyard Kipling’s famed poem If. Here is just the first verse of the poem:

If you can keep your head when all about you 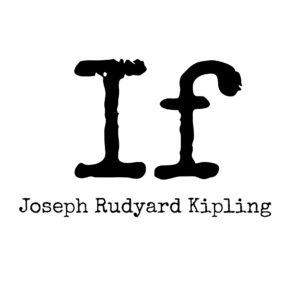 are losing theirs and blaming it on you;
If you can trust yourself when all men doubt you,
but make allowance for their doubting too;
If you can wait and not be tired by waiting,
or, be lied about, don’t deal in lies,
or, being hated, don’t give way to hating,
and yet don’t look too good, nor talk too wise.

It certainly takes courage to get up in front of one’s peers and recite the entire four-verse poem from memory. Part of our mission is to encourage virtuous living in our students. If we are to become virtuous—in this case courageous—we ought to practice living courageously.

What then is courage? The dictionary defines courage as “the state or quality of mind or spirit that enables one to face danger, fear or vicissitudes with self-possession, confidence, and resolution.” The English word courage has its roots in the Old French word corage, which in turn stems from the Latin word cor, or heart. As the heart was often classically thought of as the seat of emotion, we may be tempted to conclude that courage is therefore concerned solely with something that is emotional or passionate. However, Aristotle gives us some helpful structure in thinking more carefully about courage.

Courage, according to Aristotle, exists somewhere between fear and over-confidence. Some things ought to be feared; it would not be courageous to impulsively rush into danger. Aristotle refers to such impulsivity as recklessness, or one might even say foolishness. On the other hand, a coward is someone who perpetually lacks confidence and is hampered and enfeebled by fear and concern. Aristotle tells us to look at an individual’s motivation to better understand what true courage is. The courageous man, he writes, will fear things…but will endure them in the way that he ought and as reason commands, for the sake of the noble, for this is the end of virtue.  In other words, the motivation of true courage ought to enable individuals to accomplish noble things. One would not endure fearful things for something that is ignoble, base or unworthy. Also, note that courage is not mindlessly acting on impulse, but rather is commanded by reason. It is not pure passion, but is based on knowledge and wisdom, though it also takes something of the heart—the cor—to face fear and confront dangerous or intimidating things. With Aristotle’s help then, we might conclude that in the face of danger,

courage is a firm conviction, with appropriate levels of fear and confidence,
that compels one to accomplish and pursue that which is noble.

Classically, courage was thought of as bravery in warfare. Perhaps you are familiar with Herodotus’ account of the courageous three hundred Spartans during the battle of Thermopylae? 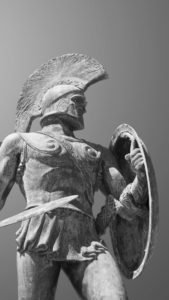 In 480 B.C., Xerxes amassed a great Persian army for an invasion aimed at conquering the Greek city-states. Leonidas, the Spartan king, led a small force of several thousand Greek hoplites to the North to delay the arrival of the massive Persian army, thereby giving the Greeks a chance to prepare and coordinate their defense. The meager Greek force blocked the Persian army for several days, providing valuable time to the Greek defenders back home. At one point, a Spartan scout reported to King Leonidas that there were so many Persian archers that their arrows would blot out the sun. It is said that Dienekes, one of the Spartan warriors, replied:  “Good, then we shall fight them in the shade.” Eventually, the Greeks were betrayed by one of their own. Leonidas dismissed all but 300 Spartans and several hundred other Greek troops. They managed to hold on but most were killed. Their courageous last stand was propelled by their noble desire to defend and preserve their homeland.

However, courage need not only be defined on the battlefield. It is often featured in classical children’s stories. Do you remember the famous fairy tale Jack and the Beanstalk? After Jack climbs up the beanstalk and arrives in the beautiful country above, an ancient lady informs him about the castle of the wicked giant who keeps wonderful treasures inside. She tells him that someday a young lad will come from the valley below to win the treasures for his poor mother.  This task will be fraught with great danger and peril because the giant is fearful indeed. Jack replies, “I fear nothing when I am doing right.” Courage motivates him to do the noble thing, for the sake of his mother.

There is yet another type of courage, the kind one needs when one has to face the Principal and explain why one is standing in his office holding a disciplinary referral sheet—otherwise known as the dreaded “pink slip.” Indeed, I have known a student or two who folded it or crumpled it up in an attempt to hide it while waiting outside my office. Furthermore, one cannot deliver the bad news of that “pink slip” to mom or dad that evening in order to obtain a parental signature without summoning up at least some level of courage.  It also takes courage to climb out of the car and enter the hallway on one’s first day of Kindergarten.

This is all hard work—one does not become courageous overnight. But over time, through steady efforts informed by knowledge and wisdom, we begin to comprehend the balance between fear and confidence, and begin to sense what it means to be courageous in the pursuit of that which is noble.

Can you tell which virtue Shackleton was appealing to?